Capitol Conversations is a new OKAgPolicy series highlighting the OKFB Caucus, a bipartisan group of Farm Bureau members in the Oklahoma Legislature. We sat down with Rep. Casey Murdock to hear about legislation he’s working on this year. Murdock is a farmer and rancher from Felt, Oklahoma, and represents House District 61 which includes Beaver, Cimarron, Ellis, Harper, Texas and Woodward counties. 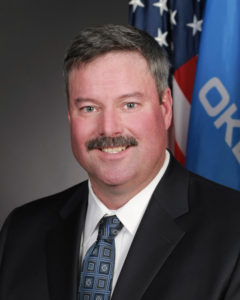 Your bill to ban drones over ag operations has received lots of attention. Why is it needed?

This bill gives local law enforcement the ability to basically write a speeding ticket if you’re flying a drone outside of FAA regulations; I’m not changing FAA regulations. There are bad characters in every industry, but some groups are trying to use drones to take a photo of that “gotcha” moment just to embarrass an industry. This bill protects from nefarious characters looking for that one photo.

Farmers and ranchers don’t have anything to hide. If anything, agriculture in Oklahoma is 99.9 percent transparent. If you want to look at someone’s operation, more than likely they’ll say, “Come on out. We’d be glad to show you what we’re doing.” But, we want to explain what we’re doing. Agriculture, to a layman that sees it outside of context, may look bad. When I vaccinate my calves and put them in a chute, that chute is there to hold the animal while we treat it. Someone who doesn’t understand what’s going on may think that looks bad, but the chute really is there to prevent harm to the animal. We’re not trying to hide anything, we’re just trying to protect private property rights and privacy with this bill.

You’re a co-author on a bill to allow nurse practitioners to serve as a primary care provider. How will this bill help rural healthcare needs?

My mother trusts and relies on a nurse practitioner for her healthcare. It’s hard, almost impossible, to get a doctor to move out to rural Oklahoma. We have to give them a deal just to get them to come, like a program to pay for their college after so many years of service at a rural hospital. But, we have nurse practitioners willing to provide care in rural Oklahoma. For rural Oklahoma, that could be the answer for our healthcare needs. This bill helps fill a need. I’m not setting a standard for either rural or urban Oklahoma; it’s an opportunity to provide healthcare to rural Oklahoma. A lot of times, these rural hospitals are struggling. Doctors graduate medical school with a ton of debt. They’ve got to be out there trying to make as much money as they can. They see they can do that in urban areas. It’s harder to make it in a rural area.

The state again is facing a nearly $900 million budget shortfall. Can you explain your bill that could possibly find revenue for the state?

First of all, I cannot in good faith raise taxes on Oklahomans until our house is in order here at the state Capitol. I can’t ask them to redo their budget, to tighten up their daily lives to pay higher taxes, if we haven’t done the same here.

My audit bill requires a performance audit on the top 20 state agencies as soon as an agency head leaves. I modeled this legislation after Ohio, where they’ve seen $33 dollars in savings for every dollar spent on an audit. The audit looks for savings, but also will help the new agency head understand what’s going on within the agency.

The Legislative Service Bureau would have authority over the audits, rather than the state auditor, giving the state Legislature just one more tool in the toolbox when budgeting. I’m hoping by putting it in the LSB, we’re able to funnel out some of the political maneuvering and actually use it for its intended purposes.

Once the audit is finished, all the findings will be made public. The Appropriations and Budget Committee chairs and subcommittee chairs, along with the governor, Speaker of the House and Senate Pro Tempore, will be able to use the audit for budgeting purposes.

The audit only takes place when an agency head leaves, but only every four years. We also will do a risk analysis on an agency. If it doesn’t show they need an audit, we won’t do it. The top 20 agencies in the state is a starting point. If it looks like we’re saving a lot of money, we can expand it to all agencies.

Can you tell us about other legislation you’re working on?

Yes, I’ve got a bill that will allow county commissioners to contract out baling hay in the bar ditches. I visited with a county commissioner during the summer, who said it cost him around $50,000 just for the equipment and diesel to mow bar ditches. Last year, we had a tremendous year as far as rainfall, and we could have made a lot of hay. If a farmer or rancher wants to get out and bale the bar ditches, this bill will allow counties to contract with them. It saves the counties money, and gives the farmer or rancher extra forage.

I’m also an author of a bill to give municipalities the ability to waive the three-mile setback for swine feeding operations. Current law prevents the creation a hog facility within three miles of a municipality. There’s also a cattle feeding operation bill running through the Senate; I’m a House author on that bill. It basically gives power back to local government. If a city wants it, they’re able to do it. It’s local government control; we need to get the power back to the local government. They know what’s going on, what they need to look out for, a lot better than me sitting at the state Capitol.

Rep. Casey Murdock is a farmer and rancher from Felt, Oklahoma. He was first elected in 2014 and represents House District 61 which includes Beaver, Cimarron, Ellis, Harper, Texas and Woodward counties.