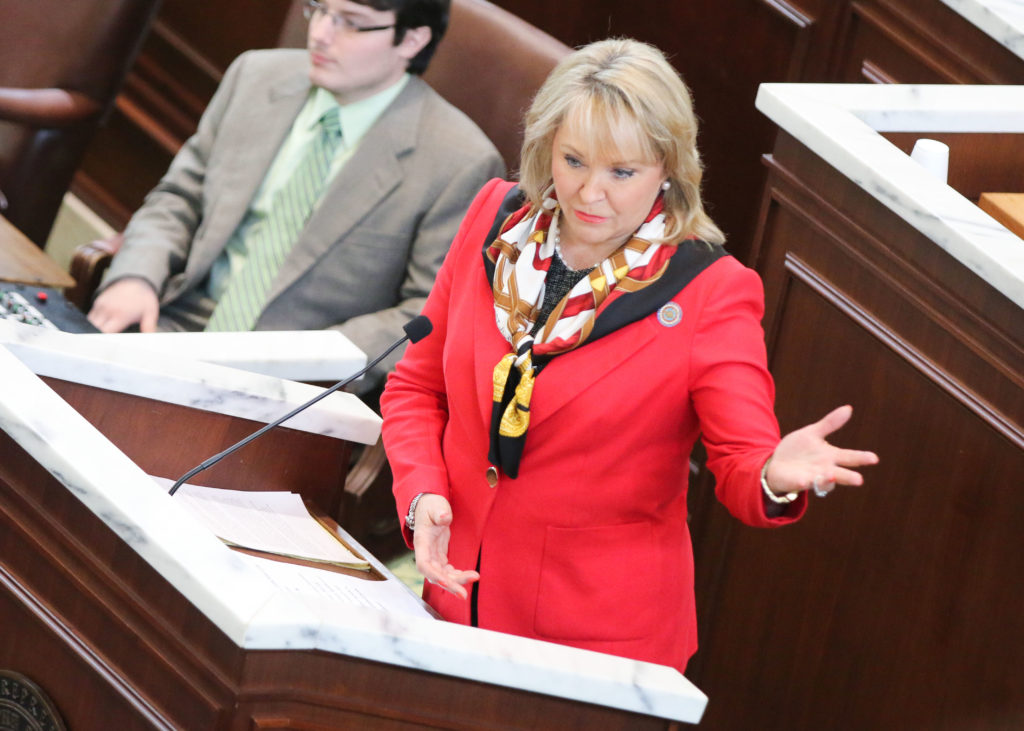 Oklahoma Gov. Mary Fallin today began the first regular session of the 56th Oklahoma Legislature with her annual State of the State address to both the House and Senate. In her nearly 30-minute presentation, Fallin outlined her goals and priorities for the state budget which has a nearly $900 million hole. Below, find key highlights of Fallin’s proposals for the budget.

Fallin suggested ending “one of the most volatile sources of revenue” in the state: the corporate income tax. Eliminating the tax will reduce paperwork for small businesses and will help boost economic growth. Fallin said it also prevents the legislature from picking “winners and losers” with specific tax credits.

Fallin proposed eliminating sales tax on groceries, calling it “the most regressive tax on the books today.” The request would save the average family of four an estimated $350 to $676 per year, Fallin said. She also proposed a reform of the state’s sales tax base, recognizing the shift from manufacturing-based economy to a service-based economy.

“By expanding the sales tax base, this allows us to eliminate the state sales tax on groceries and the corporate income tax,” Fallin said. “And it may be possible in the future to further lower the sales tax rate.”

With Oklahoma’s gasoline tax ranking 49th in the nation and the diesel tax ranking 48th, Fallin proposed increasing both taxes to meet the regional state average. The new revenue stream from the increased taxes will help fund roads and bridges, she said.

“As we’ve discussed for decades, let’s put the fuel taxes into roads and bridges,” Fallin said.

Similar to last year’s proposal, Fallin again asked the legislature to approve an increase in the cigarette tax. Costing the state an estimated $1.62 billion in health care, Fallin said smoking is the No. 1 preventable cause of death in Oklahoma. The increased revenue from a tobacco tax increase would help fund current health care needs within the state, she said.

Fallin, along with numerous other lawmakers, proposed the funding of a salary increase for every Oklahoma teacher.

“Let’s act on a permanent pay raise for our public school teachers,” Fallin said. “It is what the public and families want. The pay raise may need to be phased in and it may be targeted, but it must be done.”

Though vital, the governor said a pay raise alone will not improve the education of Oklahoma students.

“Our education system must be focused on creating the best outcomes. To do so, we must ensure more money goes to our classrooms and teachers,” she said. “We must empower students and parents by giving them more choices so they can best address their own needs.”

Fallin also stressed the necessity of a five-day school week.

“In a recent meeting I hosted with major national site selection companies, an executive asked me how he could persuade businesses to come to Oklahoma when some of our schools have four-day education weeks,” she said. “We must have five-day school weeks.”

With Oklahoma’s incarceration rate the second-highest in the country and more than 61,000 inmates under the Department of Corrections, Fallin emphasized the state’s prison overcrowding problem.

“Our prisons are way over capacity, and our prison population is expected to grow by 25 percent in the next 10 years,” she said.

Fallin’s proposals will be reviewed by Oklahoma lawmakers, who can decide whether to adopt the measures. The session adjourns no later than May 26, 2017.