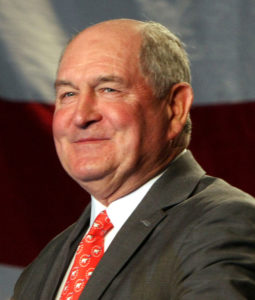 Perdue grew up on a family farm in central Georgia, and has lived and worked in the agriculture industry throughout his life. Perdue holds a doctorate in veterinary medicine and owns a company with agribusiness and transportation holdings. As an agribusinessman, Perdue will be only the third Secretary of Agriculture in history who has worked in the agriculture industry as an adult. Thus, he not only understands, but also has firsthand experience with the challenges facing both agriculture and rural America.

Perdue has a long record of outstanding leadership and commitment to the agriculture industry. Governing a state that produces billions in agricultural commodities, Perdue valued the problems and concerns facing farmers and ranchers. In the words of American Farm Bureau Federation President Zippy Duvall who served as Georgia Farm Bureau president during Perdue’s tenure as governor, Perdue will serve as a strong voice for agriculture.

Perdue will serve as a strong voice for agriculture.

American agriculture needs a Secretary of Agriculture who not only understands the problems plaguing production agriculture, but also is willing to fight to solve them. Sonny Perdue is that person.

The U.S. Senate is scheduled to vote on Perdue’s confirmation on April 24. Please contact Oklahoma’s senators to urge an immediate confirmation vote on Sonny Perdue as U.S. Secretary of Agriculture! Agriculture and rural America need a leader now.