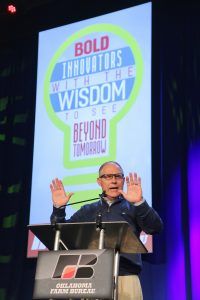 Though State Question 777, the Right to Farm, was rejected by Oklahoma voters, Attorney General Scott Pruitt – speaking Friday at the 2016 Oklahoma Farm Bureau Annual Meeting in Oklahoma City – applauded farmers and ranchers for standing up for themselves.

“It was right to take the risk,” Pruitt said. “It was right to advance (SQ 777) because there are out-of-state interests that try to come in and dictate farming and ranching practices that we need to be on guard against.”

SQ 777 was a proposed amendment to the Oklahoma Constitution on the Nov. 8 ballot that would have granted farmers and ranchers rights to use agricultural technology, livestock procedures and ranching practices.

“This was an effort – a justifiable effort – for farmers and ranchers across the state of Oklahoma to say, ‘We’re going to protect ourselves, inoculate ourselves against that type of approach by out-of-state interests,’” Pruitt said. “Unfortunately, it was mischaracterized by opponents.”

Oklahoma farmers and ranchers, along with legislators, now must be on guard against the attacks of these groups, Pruitt said.

“There’s not a clear and present threat that I know of today, I think this was just simply, ‘We want to protect ourselves into the future,’” Pruitt said. “I think we just have to be vigilant in watching to make sure that those folks don’t come in and try to achieve that.”

The attorney general has firsthand experience guarding against out-of-state interests like the animal rights group Humane Society of the United States. In 2015, Pruitt was sued by HSUS for investigating the organization’s fundraising tactics following the 2013 Moore tornado.

“There are some 501(c)(3) entities that sometimes are charitable in nature, but they act more like a policy arm, like a 501(c)(4), which is the educational part of the tax code,” Pruitt said. “(I’ve been) monitoring that to make sure the monies Oklahomans give to those organizations are actually used for the purposes of charity and the mission of the 501(c)(3), as opposed to maybe advocacy or political advocacy.”

Pruitt said he remains committed to protecting all Oklahomans, especially farmers and ranchers, from the agendas of out-of-state groups.

“If those interests come into the state in the future, perhaps it will be time to respond that way again,” Pruitt said. “In the meantime, we’ll be on guard against that.”