WHAT IS RIGHT TO FARM?

Also known as State Question 777, the Right to Farm is a constitutional amendment that protects Oklahoma family farmers and ranchers. It will appear on the general election ballot in November.

Each and every day, activist organizations like the Humane Society of the United States, People for the Ethical Treatment of Animals, the Sierra Club and more attack agriculture and its scientifically-sound practices. These organizations push feel-good legislation in state capitols across the country, hindering the ability of producers to provide food to our nation and our world.

Oklahoma has a rich heritage and deep roots in agriculture. However, current consumers are four to five generations removed from the farm. Most do not understand how farmers and ranchers produce food and fiber. Thus, activist organizations are able to use emotional arguments to sway consumer opinion and ultimately, change the industry.

The Right to Farm amendment would ensure future generations of Oklahomans are able to produce a safe, affordable and abundant food supply for our state and nation. 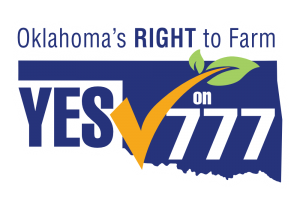 HOW WILL SQ777 HELP OKLAHOMANS?

Tonight, more than 650,000 Oklahomans will go to bed hungry. 650,000! With hunger already a prominent issue in our state, we cannot afford to further restrict the industry that provides healthy food.

Several states across the country have implemented laws restricting the right of choice including California, Oregon, Vermont and Florida. For example, California passed Proposition 2 in 2008 requiring egg producers to increase the size of chicken crates, costing farmers hundreds of thousands of dollars. In result, the price of an egg, the cheapest form of protein, skyrocketed across the country.

BUT, WON’T THIS JUST LET FARMS AND RANCHES DO WHATEVER THEY PLEASE?

No. All laws and regulations on the books as of Dec. 31, 2014 will remain. Additionally, the Oklahoma Department of Agriculture, Food and Forestry still would have the power to regulate Oklahoma agriculture when necessary.

First, 98 percent of Oklahoma farms and ranchers are family owned and operated. The Right to Farm protects all Oklahoma farmers from urban, organic farmers to small, hobby farmers, to large, traditional farms.

If passed, SQ777 gives all farmers the right to choose what kind of crops and livestock they will raise. For example, the state will not tell a farmer he or she cannot raise a GMO crop; yet, the state also will not tell a farmer he or she has to raise a GMO crop. Farmers and ranchers will remain in control of their own operations. In turn, this measure protects the consumers’ right to choose in Oklahoma. For example, a consumer won’t be forced to eat food with GMOs in it; yet, the consumer also won’t be forced to eat foods that are GMO-free.

LEARN MORE ABOUT THE RIGHT TO FARM AMENDMENT AT WWW.OKLAHOMARIGHTTOFARM.COM.